i ain’t lion to you

Friends, ever since I was on that Murchison Safari trip where we saw the lion take out the warthog, I (and the other girls) have been slightly obsessed with lions. And lions in the bible.

After the aforementioned (and highly graphic scene),  we opened the bible and started naming stories that had lions in them – and settled on Sampson.

Sampson 14 – Sampson is talking about a woman that he wants to marry, and he and his father and mother started walking to her town to get her. Along the way, (4:5-6) a young lion came roaring at him. The Spirit of the Lord came upon him in power so that he tore the lion apart with his bare hands as he might have torn a young goat.

Now, given that we had just witnessed an attack, it was amazing to us that Sampson had the ability to “tear the lion apart with his bare hands.” All because the spirit of the Lord came upon him. I guess I’ve never really thought about what happens when the spirit of the Lord comes upon someone. But now, it takes on new meaning. I see the words differently – and I have something to which to compare the strength of Sampson to.

But this new fascination with lions doesn’t end there. And trust me, I wish it did. But I was reminded of sitting in orientation at the beginning of the year, when one of the speakers (Ryan) talked to us about 1 Peter 5:8. It was the only thing I wrote down during a 3 day orientation. 1 Peter 5:8 reads “Be alert and of sober mind. Your enemy, the devil, prowls around like a roaring lion looking for someone to devour.”

My notes tell me that male lions don’t typically attack – they often times roar to distract you while the lionesses  get close. Correlation to the bible being that the devil distracts you from God.

I wanted to confirm that male lions don’t attack and so I decided to research a bit more on the lions:

– the mane of a male lion turns darker as they get older. They live 10-14 years in the wild and longer than 20 in captivity.
– lions hearts make up only .5ish percent of their body weight – they need to be close to their prey when they attack because they can only run short spurts
– lions do not typically hunt people – but in 2 publicized cases in Africa where the lions took 28 and 6 people, after the lions were caught, they were found to have been large, mane-less and have poor tooth decay. another case from 2004 in Tanzania where a lion killed 35, the lion was found to have a large abscess underneath his molar which was cracked.
– a lions roar can be heard 5 miles away!
– lions rest about 20 hours per day.

I may have gotten lost in an internet click frenzy leading me from page to page of lion facts. (And realize that all of this information is probably information that a 3rd grader could tell you.) But, this morning, while in our pjs eating chocolate cake, 4 of the girls from the Murchison trip and I started talking about lions…again. One of them mentioned the verses in Isaiah (65:25) about the new heaven and earth. And how what we witnessed was really relatable to the fall of man. Watching the lion maul another animal is not how the lions were made. In the new earth “the lion will eat straw like the ox – they will neither harm nor destroy.”

We also talked about how the Olympics were around before Jesus. And the Great Wall was around before him. And how the book The Elephant Whisperer has a teenage elephant in it that is killed after attacking cars and people…only to find out that the elephant had an infection on its tusk – much like the old man-eating lions and their teeth. And about worms and parasites here in Africa and what they do inside you. But I digress…

Maybe I have a lot of time on my hands. Or I am slightly damaged by the sites (and sounds) seen during that attack. Or that the bible has come to life in a different way. But whatever the reason – I still find the world fascinating. The word fascinating. And I am in awe of God’s details for our days. 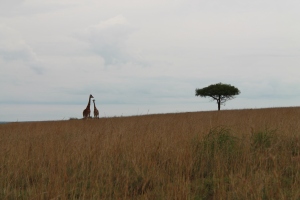 Hoping that you experience something that leaves you with an unquenchable thirst for God.