On Sunday, my friend Diana, invited me to attend church with her. It was “Cultural Sunday” at church and she thought I’d enjoy the congregation dressing up in their native wear. She was right.

People walked into this stadium seating, large church, dressed in their brightly colored clothes – draped with sparkles and shells and beads. I was surrounded by colors! And it marked the beginning of my jealousy…

The worship was a song from each tribe, and at the start of the song, people were hootin’ and hollerin’, and performing the traditional dances. Not people on the stage. People in the seats! The atmosphere was one of pride from each person and tribe, and just good ol fashioned praising the Lord. Out loud. Even being the lone white girl in the audience had me shakin’ a bit. I’d find myself pausing during the song, caught up in a moment of “is this really my life!?” and with a heart that longed for a life drenched with traditional songs and dances. My jealousy for the way their bodies move, and their unabashed celebration of life reached a peak at this point and I started trying to decide which tribe I would claim for my own. 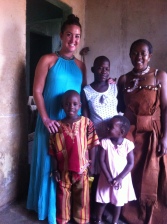 Even though we all come from different nations, different tongues, we all worship the same, wonderfully amazing, BIG but still knows each of us, God. I’ve spoken of it before, but in moments when people are worshipping in different languages, I also reflect on how big God is. And how he can hear each of our prayers and praises, at the same time, and in different languages, and discerns each of them. I feel small in those moments, and abundantly blessed.

We ended the worship service with some more traditional dancing, but this time, with the introduction of each tribe, the members of the congregation that belonged to the tribe ran down the aisle to the floor and started dancing! Oh my gosh! Imagine them running/dancing down the aisle with the same enthusiasm of a Price is Right contestant after their name was just called!

The service was 4 hours long. I sat with a smile on my face the entire time and never wanted it to end.

After church, Diana invited me over for lunch, and we spent the next several hours loving on her kids and each other, sharing stories and eating. It felt like Sundays back home when I was growing up and we’d all get together over at Nana and Pops. No time constraints or trying to fit several things into your day – just an afternoon to be near each other. And it was perfect.

On my way home, I thought about what would be represented from my tribe. Is it America as a whole? Or am I from a southern tribe? Would I booty shake, like any good girl from Atlanta does? Or boot scoot boogie? And as much as I love being from America – it’s hard not to wish you were from a tribe somewhere in Uganda when you see how beautiful the people are. How beautiful the dances are. And the fanfare of it all. And if you ever get the chance to spend time with them, you will start to feel like you are a part of them anyways….even though you speak differently. And look differently. They will just see you as one of their own.

And when that happens, you’ll realize that you’re the luckiest girl in the whole wide world. 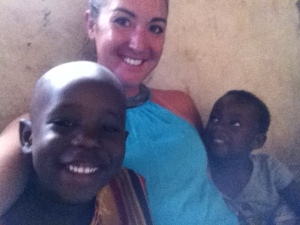