a guest in Geoffrey’s home

I was anxious as we pulled up to Geoffrey’s home. It was several dirt roads away from anything. The home lined with a branch fence. Three small mud homes (home for he, his sister and brother and mom. home for the kitchen. and a home for his grandmother) and a chicken coop.

I was greeted by his mother, Joyce, his grandmother, Geoffrey and a friend of his mother’s. All in smart dresses. Geoffrey smiled, but was quiet.

We sat in a small room. Flys everywhere. The space was separated by sheets leading back to the kid’s bedroom. The place was filled with light from the open door.

None of them speak much English, so I was very thankful for the translator. I presented his mom with several gifts: sugar, peanut butter, cocoa, toothbrushes, salt, peas, etc). I told her what an honor it was to know Geoffrey. And that I thought she was an incredible woman running the farm and raising her kids. She teared up and shared that it was very difficult raising 4 kids on her own. That her husband had been gone 10 years now. And that she was lonely. You could hear the pain in her voice as she shared with me her journey.

I was overwhelmed at what was going on. Just being in Geoffrey’s home. His home with mud walls. I wasn’t sad for the conditions that he lived in, but I can no longer pretend not to know what his life looks like.

Joyce asked how my family was. She got up, walked through one of the cloth separators, and came back with pictures. Pictures that I had sent to Geoffrey. She pulled the one of my family, showed it to me – and said she knew them. She greets you mom, dad and David!

What’s really fun is that the night before I left, while talking to Dad, he told me to tell them “hello” from him. I just love that although our families are miles apart, we are thinking and praying for each other. Daily.

Joyce gifted me with a piece of fabric that women wear as skirts, or as covers while they are cooking and cleaning. She wrapped it around me and all the women laughed. Laughing is understood in any language! Her mom’s friend came up and started stroking my hair. I think we could have spent the entire day just having them run their fingers through my hair. And laughing.

Geoffrey showed me the chickens. He told me to pick one. The method to which I attempted to pick up a baby chick confirms that I am not a farm girl. The neighbors had started gathering around by this point, so my chasing baby chicks was our entertainment. I did finally catch one, though. Held it long enough for a photo.

Geoffrey is so shy. He didn’t say much to me, but I would catch him staring at me. It was the same as when I saw him 2 years ago. While in his home, he showed me where he slept and said that I could stay there with them. I could have his bed. So even though that was the extent of our communication – it was enough for me.

Leaving Geoffrey this time was more difficult than last – probably because I’m unsure of if I’ll be back here. He turns 11 on Monday. I cried as I drove away from him.

You know, Compassion may have people sign up to be sponsors to fill a need (financial, educational, medical, spiritual) for the kids, but the joy that Geoffrey has brought me over the years is immeasurable more than what little I have given. 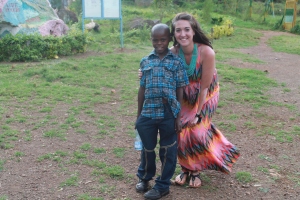 6 Responses to a guest in Geoffrey’s home