The US Embassy in Uganda held a “town meeting” yesterday for all of the US Citizens who live in Kampala. Since I had yet to make a visit to the embassy and the US Ambassador Scott Delisi would be speaking, I decided to go with some other AIMers.

As imagined, they have quite the security getting into the Embassy. Cell phones and cameras are prohibited or else I’d love to have shown you the green, perfectly manicured landscape in side. We were given this pin with both the USA and Ugandan flag on it. We sat under an American Flag tent. Listened to the musical stylings of the Eagles. Munched on fruit kabobs and chocolate chip cookies. And now that you know that we can’t actually BUY chocolate chips here, you know what a treat this was for us!

I must admit that it was a little overwhelming being surrounded by so many Americans. Seeing the American flag raised. And being on American soil.

There were two speakers before the Ambassador, who spoke on the services provided to us by the Embassy and our safety and security. Then, US Ambassador, Scott Delisi came up. He has also served as Ambassador to Nepal and Eritrea. He was charming and funny. Made attempts to seem like a regular American. And even though he sometimes spoke in political circles, he seemed genuine and approachable. Told us of the partnership that the US has with Uganda. How US tax dollars were being used to move health initiatives regarding HIV and malaria. Gave the statistic that 80% of the Ugandan population is under the age of 30, and that 50+% of those were under the age of 15 and what that means to us and to Uganda with infrastructure, programs, education, etc. It was really very educational to see how the US fits into this country I call home for the moment.

After the meeting, and 4 chocolate chip cookies, the Sudmans invited Laura and I to eat at Fasika, an Ethiopian restaurant nearby. I’ve never had Ethiopian food – so I was grateful to have the two of them order for us. They got 3 of the “mixed platters” for us to share. It was really a great evening of eating foods with our hands and conversation. The Sudmans (Mark and Lisa) whom I work with, shared stores of how they met and of their time in the Congo. They have been serving for 29 years and married for 35! Laura and I filled the spaces with questions. One thing you can always count on while serving is that those missionaries who have been serving a while will have fascinating stories. 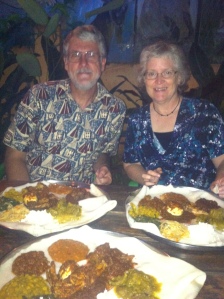