The path from Georgia to Tech.

I feel like my actions over the last few years have caused some confusion for several friends and family members. To put to rest those who are worried about me, I felt it necessary to trace my steps from being a UGA fan to being a full blown Ga Tech fan.

Growing up in Georgia, you choose one of two teams. Georgia. Or Georgia Tech. Since neither of my parents went to either school, there was no prior allegiance to belong to, so we signed up for Georgia. Early on, I remember there being a Georgia Bulldog stuffed animal in our house, and the obligatory Georgia shirt worn. We could have gone our whole lives cheering on the Georgia Bulldogs, until my brother and his boyscout troop took a trip to Georgia Tech for a football game. His love for all things Tech began. And that, is the moment when our family dynamic changed.

I still cheered on the Dawgs throughout highschool, and made my first trip to Athens my senior year to visit my cousin, Heather. That was the weekend of the Widespread Panic, largest outdoor, all you can drink and consume, music concert. Or so I’m told. There were many first that occurred for me that weekend. And I loved every minute of it.

The next year I attended the University of West Georgia and then on to Georgia Southern U-NI-VER-SITY for my college degree, where I had the best years of my life. Go ahead, silently judge my smaller school education, but I learned more about life, love and created amazing memories and best friends in those small towns. I wouldn’t trade my college experience for anything. AND, going to the aforementioned smaller schools allowed me to travel on weekends to Athens, Auburn, Knoxville and Jacksonville to see the Dawgs play. I was a devoted fan, except when UGA played Georgia Southern (and the real Adrian Peterson). 3 years into my college experience, my sweet younger brother, David, had a choice to make. Which college to go too. His two top choices? Georgia Tech and Florida. I’m not sure which is worse, but at that time Spurrier was still at Florida, and that seemed to me to be the end of the world. He choose Tech. My heart broke.

Fast forward to the year 2009. My brother has had some amazing experiences at Tech. He has a solid foundation of friends who at any given moment would drop everything to help him, or me. He has traveled the world, and crossed the country through opportunities at Georgia Tech. I got to sit with my family at the Ga Tech football games last year and wore white and gold, but you can bet come UGA/GT game my ticket was given to a tech fan. I had to find other options to secure a seat in that stadium, and wore my red and black proudly as UGA ruined what had otherwise been an impressive Tech season. My allegiances to my past had outweighed family that night, but I could feel a change in my heart had begun. This year, I became a Tech season ticket holder. I can no longer wear the red and black over the gold and white. I am a Tech fan.  That was put to the test last night…

During the last 12 years, every trip to Athens, to Sanford Stadium, I have suited up in my red and black. Been one of the many in the crowd to bark and cheer on the Dogs. This year I was on the other side. I had a gold GT on my face, and gold gloves. A gold pom-pom in hand and my Tech lovin’ daddy beside me. We walked the gazillion flights of stairs up to the 600 section. Past the dawg fans who barked, and ridiculed Tech. Past the camouflage lovin’, drunk obnoxious Georgia fan who screamed obscenities at us. All of a sudden, I realized that I was on the other side of fence. I had completely converted as a fan.

It was an amazing game, and Tech lost that one. Georgia didn’t win it. I would loved to have been cheering on the team with my brother, but his job has taken him to the Philippines…another one of those opportunities that his Tech education has provided him. As dad and I walked down the flights of stairs, you could hear the Georgia fans chanting “Nerds. Nerds. Nerds,” and I smiled. Being called a nerd isn’t a bad thing. In fact, I love nerds. Especially ones with beards. So, from the bottom of my heart, I raise a glass to you nerds out there… 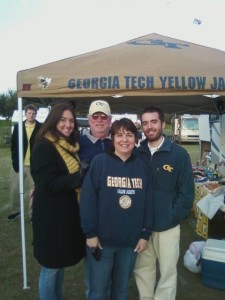 disclaimer: please note that given beaus in my future, or another UGA game played at Vandy that involves morning mimosas and a limo, I could wear black and red again for the day.